A downloadable game for Windows

A company is in the process of finalizing the launch of its revolutionary new herbal product,which promises a radical cure for cancer.Its management has been made aware that its competitors are going all-out to scuttle the product's launch.To safeguard its precious product, company's management moves the product to a secured facility with round the clock security.News has just gotten out that goons, hired by its competitors have managed to smuggle a large cache of Radio-controlled cars (RC-Cars) which are laden with explosives in a cargo delivery and these are being piloted  to destroy the herb garden .To protect its precious product,the company's security team are operating the four perimeter guns to guard against the RC-Car attacks from the four gates of enclosure containing the herb garden.

You select from one of the two roles.

1) Attacking player: You use the up,down,left and right arrow keys (Controller optional ) to launch RC-Car attacks from the four gates with an intent to destroy the central herb garden and win the round and the game.You must be mindful of Gate delays * .

2) Defending player: You use the W,A,S and D keys ( Controller optional ) to fire the perimeter guns and destroy the explosive laden RC-Cars before they can destroy the central herb garden.You need to keep the herb garden secured till a specified number of attacks : Maximum car attacks in round# to win the round.

* Gate delay:Time-period in seconds after a car attack is launched from a gate in which no more attacks can be launched.This is indicated by the gate light turning red.A part of game-settings,the value of delay for near gates (closer to herb garden) is higher than that of far gates (farther from herb garden) to ensure proper response time.

The following game settings have default values but can be set by the players within specified  ranges.Maximum car attacks per round,Near gate delay,Far gate delay,Car Speed,Munition supply per round,Round wins for game.

1) Highly customizable game-settings : By combining up to six parameters like car speed , near and far gate-delays ,Max.Car attacks in round,Munition supply per round , it is possible to provide a competitive game even between two players with widely differing abilities.

2) Scoreboard : Every game which has a winner gets logged to the scoreboard which stores details of date and time of the game,names of defending as well as attacking player and winner along with all details about the game-settings.

3) HUD display : The important and relevant information for game-play is made available via a HUD,which provides both the players with live information about number of attacks and munition balance etc.

4) How to play page : A how to play page is made available via the game menu system which provides all relevant information regarding game  to  the players with proper explanation of relevant terms.

In order to download this game you must purchase it at or above the minimum price of $1.99 USD. You will get access to the following files: 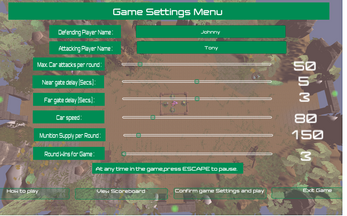 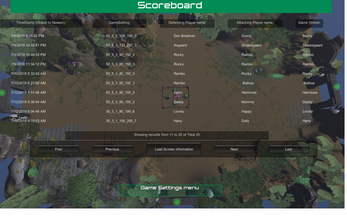 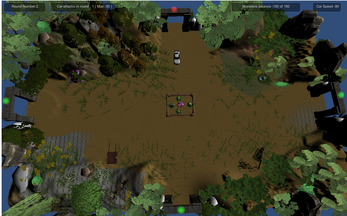 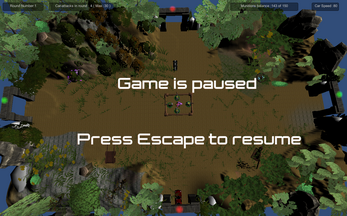 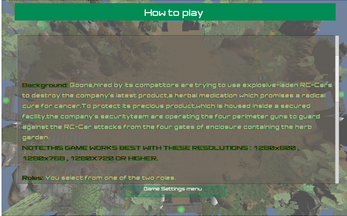